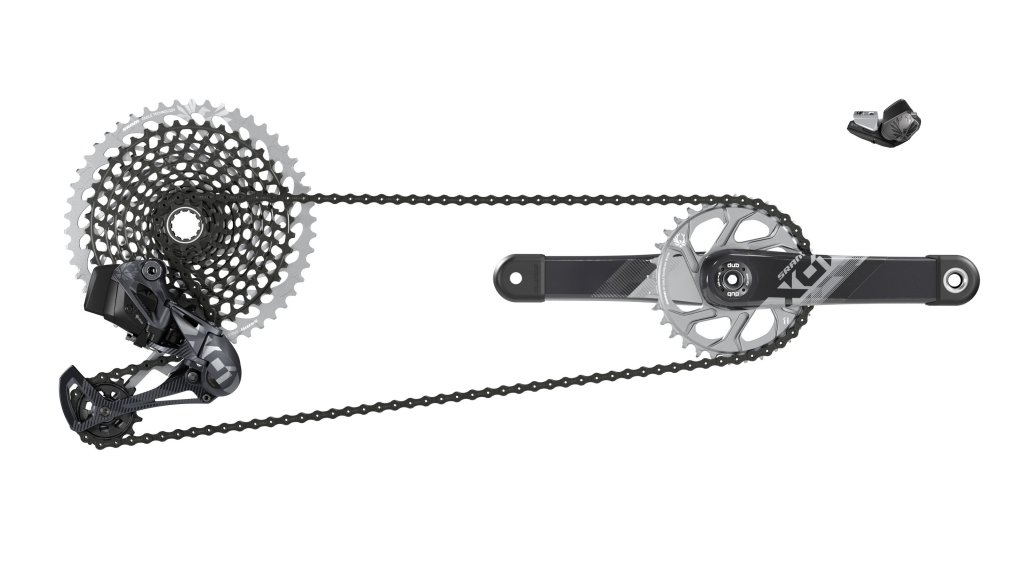 At a glance, Eagle AXS brings the real benefits of wireless electronic shifting to the mountain bike. On a deeper level, it offers discerning riders unprecedented personalization and control of the drivetrain. On the bike and off. Deepening the relationship between machine and rider. This addition to the Eagle ecosystem enhances capability. Removes complexity. And provides riders an experience like never before imagined.

Pioneering upon a proven backbone

Both XX1 Eagle AXS and X01 Eagle AXS combine the proven, dedicated 1x backbone of Eagle with a connected wireless electronic derailleur and controller. With completely new inputs at the bar that initiate a shift with a touch. Its an all-new derailleur thats specifically designed and optimized to be motor-driven instead of cable-actuated, to truly leverage what this allows. AXS powered components enable customization and scale to an individual riders liking via the AXS app.

The pure shifting performance of Eagle AXS is the real difference maker. Shift under load, over the roughest terrain, uphill, or without changing your grip on the bar. Eagle AXS changes your level of control on the bike when youre under pressure and pushing hard into the red. But more than that, it changes your relationship with the bike.

Theres an element of the unknown when it comes to running new trail and racing blind. Enduro spec follows suit. X01 Eagle AXS utilizes the proven backbone of SRAM 1x. 500-percent gear range. More secure and longer wearing X-SYNC2 chainring. The resilience of an aluminum cage, paired with the connected components of Eagle AXS. Ready for the new gen of super bikes.

Riders havent asked for this product, because it was never possible before. SRAM didnt employ the magic of wireless electronics for effect either. They engineered hardware with a new ergonomic experience based on touching a button rather than pushing a lever. Giving you faster, more consistent shifts. Letting you shift when you want, under load, without ever having to plan around terrain. Gathering useful data, telling you how many shifts have been made, how frequently each cog is being used, helping you make smarter choices on chainring size, and more. But just as important as what Eagle AXS can do is how simply it does it. With intuitive and refined practicality. Built for the rider. Not the buzz. A day before the most brutal round of the Enduro World Series, Mitch Ropelato installed X01 Eagle AXS on his race bike. After 3,600m of descending at race-pace and some derailleur-to-rock contact that should have ended his day, this is all he said: I never want to ride anything else.

More than a mechanical derailleur with a battery and a motor bolted on, the Eagle AXS derailleur is the brain of the whole AXS system. Trim it at set-up for zero rub, making the near-silent operation of Eagle even more stealthall while improving drivetrain longevity. It features a shorter cage for 10mm more ground clearance, with more chain wrap on the cassette to sit slightly further forward, and further inboard from mechanical Eagle. Instantaneous shifts from a single touch even while under World Cup-winning chain loads recorded in the heat of racing and affirmed in the test lab.

Touchpoints that are totally customizable to your preferences, allowing you to choose which button does what through the AXS app. Choose from three functions: Inboard shift. Outboard shift. Dropper. Use one of the touchpoints to control your electronic Reverb AXS dropper seatpost. And the power save mode in the controller wakes up after a single touch to save battery when not in use.

Beyond the controllers standard paddle, an included Secret Sprint paddle oriented on the front-side of the controller near your index knuckle allows for quick shifts with virtually no change to your grip on the handlebar.

Bolt it on. Set three limit screws. Press the pairing buttons. And go. Eagle AXS is trimmed and adjusted electronically for a perfect chainline. There is no additional effort to shift or idiosyncrasies to learn. And AXS unlocks an entirely new way to personalize the key interface with your bikeall controlled from your phone via a simple AXS app. Unless youre looking to set it and forget it. Because you can do that too.

A bit about the battery

Yes, Eagle AXS uses a battery. One that is removable for easy recharging after 20 hours of ride time. One that only weighs 25g and is detachable with a single clip. One that is hot swappable if neededfrom derailleur to your Reverb AXS seatpost or even your SRAM RED or Force eTap AXS road group. And it only takes an hour to charge.

Know before you go

Checking battery life is easy: Press the button on the derailleur. Green light means its at or close to full charge. Red light means its at or close to half charge. And flashing red means charge it up. Or throw on another, because keeping an extra is easy and realistic. To prolong battery life, the system goes to power save mode when the bike is stationery.

The Eagle AXS system is completely water and dust proof to the IP69K international standard. Initially developed for construction vehicles and food sanitization, the IP69K standard validates systems that require regular pressurized cleaning. For a mountain biker, it means no hesitation to head out when the weather looks less than ideal.

The Eagle AXS derailleur is smart enough to protect itself. The built-in Overload Clutch was designed to disengage on impact, return to position and shift back into gear.

The AXS app is the built-in componentry software that makes it possible to both program and personalize Eagle AXS to your specifications. Letting you adjust and personalize controller assignments for shift commands and your electronically activated Reverb dropper post right from your mobileto make it exactly how you want it. Have your left controller do upshifts or downshifts.

Assign a paddle to your AXS enabled Reverb that feels most intuitive to you. For the first time, AXS introduces digital possibilities for riders to customize, personalize, control, and improve the ride. Even when off the bike. Effectively

allowing you to create your very own Eagle AXS fingerprint.

All thats needed to get riding is to mount the Eagle AXS drivetrain, pair it and get out there. The AXS app is only needed for further personalization or to gain access to the data the system has accumulated. Whenever you choose.

Far beyond rider personalization, the seamless integration between AXS hardware and software communicates with your SRAMid. Like sending service reminders when its time to check your wear components. And so much more. Allowing you to improve your bike when youre not even touching it.

Eagle
Eagle is a complete drivetrain system that was developed to be an integrated high-performance ecosystem. The engineering and testing that went into the development provide for maximum performance, safety, and long-term durability to ensure a great consumer ride experience. SRAM guarantee this performance when Eagle drivetrains are used as a complete ecosystem. For additional information, please contact your SRAM Sales Contact.

DUB
The relationship between bottom bracket spindle and bearing is the core of DUB technology. Its where stiffness meets durability. We took it a step beyond conventional thinking and made everything simplerbetter integrating the relationship between chainring, crank, spindle, and bottom bracket. Its this approach to developing a complete system that equals better drivetrain performance.

Boost
BOOST is a new wheel and drivetrain specification that opens the opportunity for improved frame geometry with shorter chain stays, wider and stiffer suspension pivots, wider range of chainring options, as well as more clearance for bigger tires and wider, stiffer wheels.

Cage Lock
With CAGE LOCK technology in the rear derailleur, wheel removal and installationas well as chain installationbecomes faster and simpler. Just push the cage forward to create slack and lock it into place.

Flow Link
Ultra-smooth chain inner-plates are completely devoid of square edges, resulting in a chain that engages the cassette and chainring with far less friction, for quieter performance and better wear life. The design allows a narrower overall profile that can withstand greater angles, and also allows for a flatter outer-plate, which means more consistent chain riveting and enhanced overall strength.

Hard Chrome
The SRAM HARD CHROME chain has four times the elongation (wear) resistance to our other chains. This is due to the new finishing process on the inner links and rollers. Push pin strength and ultimate strength are equivalent to our current chains. The HARD CHROME chain lasts longer and is just as strong.

Matchmaker X integrated
The MatchMaker X clamp is more than just a clamp. Its like having Martha Stewart tidy up your cockpit. Since each clamp accepts up to three controls, you can put everything from your XLoc suspension lockout, your SRAM shifters, SRAM brake levers and AVID brake levers as well as your Reverb XLoc remote, all on two clamps. Short of genetically engineering longer thumbs, its the ideal way to put everything within easy reach. Just like Martha would.

PowerLock
SRAM chain engineers developed PowerLock as a tool free, sure, and consistent way to connect our chains. While PL does not require special tools for install, the especially tight tolerances of 10- and 11-speed drivetrains mandate that each PowerLock is good for a one-time application only.

X-Dome
The revolutionary machined design of the X-DOME cassette uses the same grueling manufacturing techniques that produced the PowerDome road cassette. With X-DOME, nine of the cogs are CNC machined together out of a single block of billet steel, creating an incredibly lightweight, precise and strong cassette.

XD Driver Body
XD is a cassette driver body design that allows the use of a 10-tooth small cog and provides an improved interface with the cassette.

X-Glide2
X-GLIDE2 is next generation of SRAM X-GLIDE technology optimized for the EAGLE 12-speed cassette. It provides quick, precise, power-on shifting performance throughout the gear range, and increases chain retention on larger cogs.

X-Sync2
SRAM X-SYNC2 Eagle is the next evolution of SRAM X-SYNC technology. The aggressive teeth design provides better chain retention for a smoother, more efficient pedal feel. With a focus on long wear-life, the X-SYNC2 Eagle design reduces friction and the accumulation of mud, grit and grime.